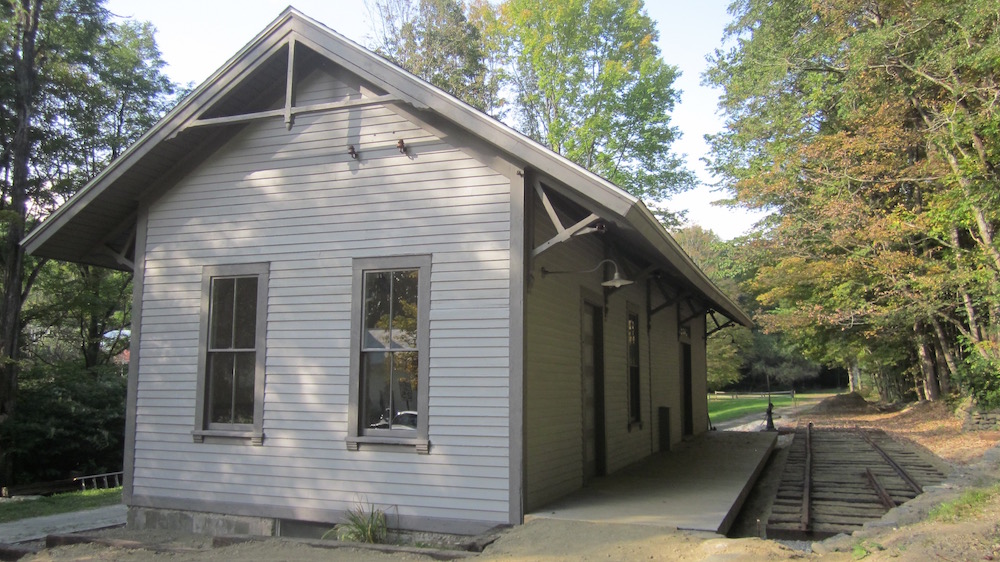 The West River Railroad Museum is open to visitors Saturdays and Sundays from Noon to 5:00 from Memorial Day through Columbus Day Weekend.  The Museum is also open by appointment.

The Newfane Railroad Station includes the old depot building and the water tank building, both of which were built in 1880 under the auspices of the Brattleboro – Whitehall Railroad (later called The West River Railroad.)  The last train rolled down the West River Railroad in 1936.  Since that time, the Station was in private hands until it was purchased by the Historical Society of Windham County in 2014.

The Historical Society undertook the restoration of the Depot Building (Dave Ross Builder, Inc., Contractor) and the Water Tank House (Chris Parker Building & Restoration).  Thanks to the financial support of a generous community of friends and foundations, the restoration was completed in three years.  The West River Railroad Museum was opened in 2017.

Watch the Grand Opening of the West River Railroad Museum (October 14, 2017) on YouTube:

The Historical Society possesses an extensive collection of artifacts, photographs, manuscripts and oral histories relating to the West River Railroad. The restored Station and its exhibits provide a visual and accessible presentation, and an interdisciplinary learning experience examining Windham County from the late 19th century leading up to World War II. The widespread appeal of trains and the lure of the railroad offers an evocative teaching tool for educators and parents.

The Railroad Station property is a short walk from the Historical Society’s Windham County Museum. 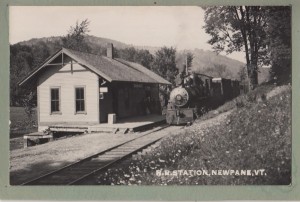 The Newfane Railroad Depot was constructed in 1880 as part of the Brattleboro & Whitehall Railroad, which was initially intended to run from Brattleboro, Vermont to Whitehall, New York. Only thirty-six miles of this railroad was constructed, from Brattleboro to South Londonderry, Vermont. It generally follows Route 30 and the West River through Dummerston, Newfane, Townshend, West Townshend, and Jamaica. The rail line was built as a narrow gauge, which had the advantage of a higher degree of curvature than a broad gauge considering the topography of the West River valley.

The Newfane Railroad Station was chosen as one of the “water stations” as it was located at the midpoint of the railroad line and on a plateau above the steep grades to the north and south. (The water was used to replenish the steam engines.) A building housing a water tank was constructed about 100 yards north of the depot, and remains standing. Originally, there were five water tanks along the railroad line, and Newfane’s was one of two that was housed within a building. The intact tank house is also owned by the Historical Society and will be part of the museum property.

The design of the depot was similar to that of most of the other depots on the West River Railroad, with a small waiting room/ticket office and baggage/freight room, and like most of the other stations, also provided telegraph operations. In 1880 Brattleboro’s Vermont Phoenix newspaper described the Newfane Station as “two very tasty buildings.”

Newfane’s first station agent and telegraph operator was local resident Joseph J. “J.J.” Green. He was killed in 1886 while riding on a train that was traveling over a railroad bridge in Brattleboro that collapsed under the weight of the train. (The Historical Society of Windham County has the original diary of J.J. Green in its collection.) His wife then served as the station agent and telegraph operator, until about 1892. The third and last station agent at Newfane was Walter C. Ballou, who was related to the Greens. He served from 1892 until the railroad ceased operation, and was probably the longest running station agent of the West River Railroad.

In 1905, the narrow gauge tracks were replaced with standard gauge tracks, and the name of the railroad line was changed to the West River Railroad. Despite the growth in summer tourism during the early twentieth century, the railroad began to compete with buses and automobiles and entered a period of economic decline. 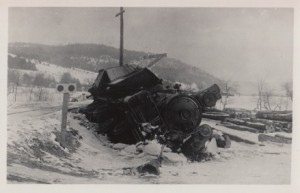 The value of the railroad was often overshadowed by frequent accidents, weather-related delays, and damage from flooding, and became infamously known as “Thirty-Six miles of Trouble.” These events and the occasional resulting lawsuit did not help the railroad’s financial situation. The 1927 advent of the gasoline-electric locomotive, which replaced the steam locomotive, may have increased ridership and efficiency, but the Flood of 1927 caused a great deal of track damage, and the railroad line north of Newfane was closed until 1931. The repairs were funded by a loan from the State, which was not repaid, so the State took control of the railroad and its lands, and shut the line down in 1936. The rails were removed by the late 1930s, and much of the railroad track beds reverted to the abutting property owners.

After the closing of the railroad, W.C. Ballou acquired the Newfane station, including the depot, a grain mill, the tank house, and 3/4 acre that straddled the track bed. He converted the waiting area to his real estate office, which was later taken over by Charlie Whitney. After Ballou’s death in 1959, the property was conveyed to his daughter Fraye Ballou Brown, who sold it to William B. Mantel in 1965. Mantel, his wife Fannie, and their children lived on the large farm east of and abutting the railroad station property. For a short time after acquiring the property, the depot building served as a youth club, and thereafter was used only for storage. Fannie Mantel (1921-2013) was a president and active board member of the Historical Society for many years, and it was her wish that the Historical Society would eventually be the stewards of the station. Her children followed this wish, selling the property to the Historical Society in 2014.

RESTORATION OF THE STATION

Restoration began in the Spring, 2015 and work was completed in 2018.  The Society continues to expand the Museum’s holdings and exhibits and is currently installing rail and ties connecting the Depot building to the Water Tank House.